It is not uncommon for me to feel guilty if I set some time aside from my work to tend to personal projects. That’s the trick with social media writing, one article or interaction on a client’s Facebook page leads to a new idea, new content and new research. Reaching well beyond the agreed upon “clocked time” is a common occurrence. In fact, it goes without saying. Learning to make time for myself is an ongoing lesson, but the older I get, the more I get it. It’s a matter of planning. No one gets short-changed. Quite the contrary; the writer gets replenished. How ’bout that?

A very dear friend and I had breakfast at 158 Main this morning. In fact, this is someone who is teaching this hermit about friendship. I can count true friends on one hand, and could still do so if I lost fingers. This friendship is unlike any model of friendship I might have expected growing up in the 70’s, a time when television reflected back to us what our society was all about. From family life to schoolyard friendship to politics to career, we were all trench-coat clad, briefcase wielding bureaucrats, housewives or factory workers playing perfectly innocent schoolyard games in groups as if life were the Truman Show. I don’t know where I get this, but it seems accurate.

Perhaps we are meant to encounter real friends only later in life, after we’ve experience betrayal from both the giving and the receiving end. Perhaps we are meant to tame work relationships in the same manner, only with lots of time on the clock of life. Long story short, the friend in question was first a supervisor, one I ended up chewing up when I chose to move on. I was baffled by some workplace issues I thought I understood enough to judge, and I let it out on her. Righteousness is a nasty disease.

A few months after this incident, and to my great surprise, she reached out to ask how I was doing. Of all the people who could possibly reach out to me, this was the most unlikely. Had she chewed me up like I did her, I would have wanted to slap her into shape, not kindly reach out human to human. This is perhaps the most important life lesson I have ever learned. I cherish this true friend.

Thus said friend and I had breakfast at 158 Main earlier and I took a picture of my food to post on their Facebook page. I cannot help but laugh at the silliness of this.

We took ourselves very seriously in advertising, photography, film, arts and communications classes in college and at university. We imagined careers in television studios and alongside mega film crews, or as strategists in advertising firms. Even though our greatest inspiration came from a man who accurately predicted the advent of social media, Marshall McLuhan, it did not cross our minds one moment that our careers might involve such activities as developing content on virtual forums. In fact, even our teachers did not grasp this possibility. By all appearances, we were going to pursue ordinary careers, based solely on the industries that existed in the moment.

This is why many of us did not succeed. Except that we did. We did not succeed whenever we tried to fit the cultural model of the time (in any industry), because this meant disregarding that the model or mold was not like a solid container, but rather like a giant, fluid, flexible silly putty bubble; ever-changing yet somehow always true to its real nature. Success required adaptability and spontaneity. We had to stretch beyond models, much like the small child in the back of the classroom who must stretch her arm above and beyond any others as if this were the only way for her to reach through a portal ( a perceived barrier) in order to enter the realm of existence; and it is.

I am no expert, but I suspect that this is one of the main causes for the current employment and financial crisis: we are still trying to play out the roles of linear careers based on 20th century models. We are not sure how to stretch. Perhaps we are afraid to remain invisible and insignificant, so we don’t risk it. Yes. That’s it. We have not learned that our input is valuable; we have only learned that we must go to work. So much for being inspired.

Careers are linear not by virtue of following a proven path, but by virtue of becoming an original and fulfilling journey. There is a difference. One is based on following an established road map; the second is constantly recreating the map. This is an individual journey. It’s all about what we bring to the job. Better yet, it’s about what we believe we are capable of bringing to the job, whatever job.

We forget that we do not study math in order to become a mathematician; we study math because we are drawn to it and our knowledge and passion will allow us to embark on the course that is our true place in the world, even if just for a moment, until a fork in the road makes us realize that we are doing something utterly different and totally rewarding. Yet our knowledge of math got us there, somehow, and there is no way to predict this. Trying to predict blinds us to side roads.

This weekend is for art. I had an idea for a new doll. Back then, in school, nothing would have prepared me for becoming someone who makes art stuff that I sell… yet in fact everything prepared me for this. Here’s a glimpse. Gotta dress up this little guy, then make more if I like the outcome.  ~ Slàinte! 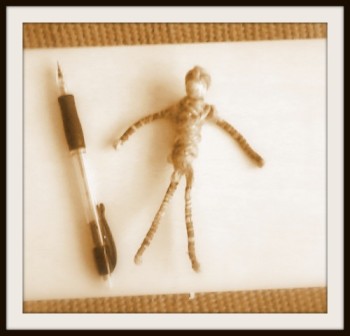 2 thoughts on “Career paths out of the box”