Little did I know, when I joined The Vermont Hand Crafters, last fall, that I was opening a wonderful “can of good worms.”

Normally, the mere mention of said can conjures up the possibility of imminent, overwhelming and dark challenges. While the word “overwhelming” is rather appropriate in this case, light, not darkness sets the tone.

The first bright challenge arrived after I had spent several months immersed (as much as possible) in building an inventory of paper mâché animals, gift pouches and brooches for prospect shops and galleries. A couple of clients for whom I had previously done some website design and social media management convinced me to return. I had promised myself, or so I thought, that I was done with that career path, but something in me could not resist.  I accepted.

No regrets. Now, I am enjoying this more than ever, and I am convinced that it is precisely because of my restored confidence in my art and commitment to it. I feel more complete now, somehow.

The overwhelming part comes into play at this point, and lies in the fact that I have received back to back invitations to join gift shops and galleries. This, in fact, has been effortless, and all thanks to my decision to splurge (for it was a splurge at the time) on a membership with The Vermont Hand Crafters. Doors are just opening before I even knock.

I am not saying that I expect this to be the norm, and I can only do so much anyway. The last several months have been a juggling act between two or three social media or web design gigs and making room every day to build an ongoing inventory that vanishes to a new venue the moment it is complete.

This is the newest batch… and a cow was born. 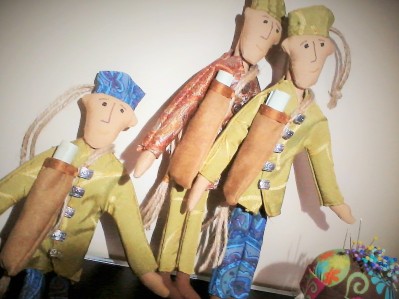 2 thoughts on “A Can of Good Worms and a Cow”