I have a great little book for creative writing exercises. It has been a while since I’ve had a chance to use it and I’ve been thinking I must make time for it again. An opportunity for some truly spontaneous creative writing showed up on Facebook last night. I could not resist.

An acquaintance from town sent me a private message, just saying hello. I soon realized I was chatting with an impostor and I simply could not resist the sudden urge to play along… in my own way.  It took a while for “Whoever” to be rendered speechless. The exchange was short, but entertaining. 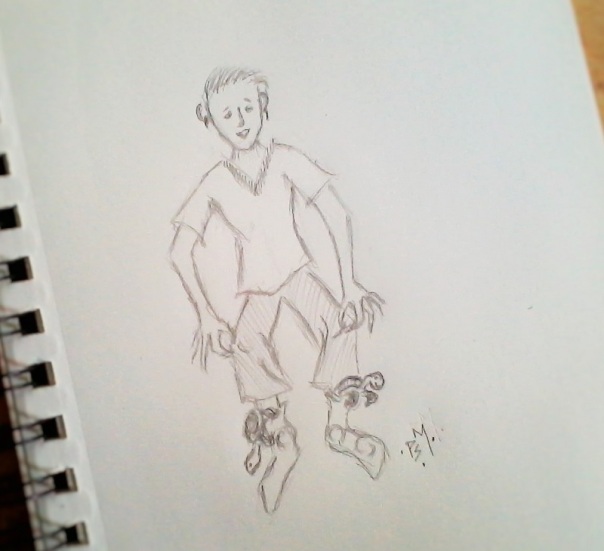 Whoever: Hello, how are you doing?

Me (not suspecting anything yet): Good evening ——–. Sorry I did not respond sooner. I was right in the middle of work when you wrote. Thanks for saying hello. How are you?

Whoever: Am doing good and very happy,so have you heard about the good news yet?

Me (getting suspicious): I could use some good news!!

Whoever: Did you hear I won money from facebook which the owner of facebook is doing for the Grant promo …

Me (thinking up a trick question): Wow! Good for you. So are you going to buy that house you’ve been looking at in Montana?

Whoever: I won $100.000.00 It was a randomly selected program through Facebook username and emails and have gotten mine did you get yours too?

Me (now I’m going for it): Yes. The sky is blue and there are turtles in my socks. However, grandma said it would rain tomorrow and she is building a concrete wall with her bare hands.

Whoever (clearly on auto-pilot): I suggest you should contact the claiming agent and get your win money like i did because i saw your name among the lucky winners when mine was delivered to my door step by the Fedex men.

Me: Oh I love the FedEx men. They always have tea with the Cheshire cat every Sunday after they go to Costco. Last week I saw a tall ship cross the street in front of the Dairy Queen. Were you there?

My final farewell: Well, that’s it for me. I have to return to liquid state before the insoles in my shoes change to pop tarts. I hate it when that happens. It was nice chatting with you. And PS: You still don’t get punctuation, do you?

Oh, I’m still laughing my turtle filled socks off just re-reading this. I hope I never grow up.

I quit my day job. Back in June. For various undeniable reasons. It was time. Time to start creating what was truly in my heart.

I must say I have been quite disciplined, and that includes my creative writing practice. The following story is a piece I wrote a few nights ago using “Story Cubes.” These consist in nine dice with images on all faces. That particular night, I picked and threw four dice, randomly. The moment I saw the pictures, I knew one of the characters would be Grace, the seven-year-old or so version of a good friend’s recent and first newborn. Here is what I wrote… 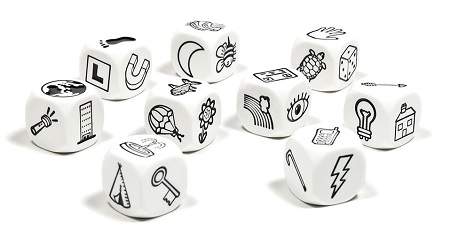 Hold still, said Oliver, you’ll ruin the spell. Grace fidgeted on the upturned pail that served as a stool while her brother circled her and gently tapped her head with a stick.

It was not any ordinary stick, mind you. He had stumbled upon it that morning, on the small path that led to a river near their summer camp, and had immediately known the true nature of what might have appeared to the inexperienced eye of others to be a mere broken branch. Its silver bark instantly informed Oliver that it had come from one of the neighboring Beech; and Beech do not put branches on Oliver’s path randomly.

He took it home and carefully wrapped an old leather shoelace around the thicker end. This, he knew, was the handle. Grace watched him, attentively. She admired her big brother’s creativity and the mysterious things he understood about the earth and the world. Is it a magic wand? She asked, almost knowingly. He only smiled. She knew that meant she was right. He carved a few magic symbols near the handle. Then it was ready.

His connection with the magnificent tree had started at a very young age. There was a rainbow that day, mumbled Oliver. Grace liked to hear that story and asked him to tell it at least every other day when they stayed at the camp. It fascinated her to know this had happened before she was born, and yet her big brother trusted her enough to share his secret world with her. She would not tell anyone. She understood it meant the Beech had chosen her too.

There was a huge rainbow that day, began Oliver again, as he walked in circles around his sister. You were in mom’s belly and I ran to the edge of the pond to see it better and mom could not keep up. And that big toad that used to live next to our dock was watching the rainbow too. He did not even hop away when I came running. That’s how I knew it was a very important thing that was happening. And you sat next to the toad, interrupted Grace. She loved that part best, because she loved toads and frogs and lizards. Yes, I did, and mom was not far behind us, but it was like Mr. Toad and me we were in another world.

And then I swear I heard someone call my name, continued Oliver. It was like a whisper and I turned to look at that huge Beech that lives right next to our shed and I swear for a minute I saw grandpa there, like he was going to give me a great big hug. But grandpa was in heaven, pointed out Grace. He was, agreed Oliver, but people in heaven can do that sort of thing. So I got up and I hugged the tree and I swear it was like it was a person. Maybe grandpa or someone else, but a very good person. And that’s how I knew Beech are special. They can do magic things.

Grace was not fidgeting so much anymore. That story was so mesmerizing to her, even though she must have heard it a hundred times. Oliver circled once more and suddenly, standing right in front of her, he raised his hand, made zigzags in the air with the magic wand and slowly lowered it to his sister’s forehead as he proclaimed, Wham! You’re an Indian.

Grace ran to the camp to get that big blanket she had used many times to turn the picnic table into a tent. Oliver tied the oars from the family canoes as best he could to make a frame. Once the blanket was secured around it, it looked like a decent teepee, just big enough for little Grace to climb in.

Normally, she would have insisted on bringing along her stuffed animals, but not today. The story of the grand-father Beech had awakened something different in her this time. She felt a sense of reverence that was utterly new to her. She could not have named this feeling, but it inspired contemplation. So instead of the stuffed toys, she got a book and read nonstop for the rest of the afternoon.

Oliver sat nearby, quietly. He saw the change in his sister. He had changed too. The adults might have called it growing up. They felt something different. They felt blessed.